What To See Along the Way from Ubud to Amed?

How far is Amed from Ubud?

Reaching Amed from Ubud involves a drive of 2 1/2 hours. You can either make the drive straight to Amed or even better, stop on the way at some of East Bali’s attractions.

Combining a few of East Bali attractions into your journey will not only be cost effective but you’ll also be making better use of your time and most importantly, it will be a perfect addition to your Bali holiday.

Here we have made a detailed itinerary for East Bali’s hot spots where we suggest what to see along the way.

Tip: This itinerary also applies if starting the day trip from Canggu. In this case, travel time will increase by 20 to 30 minutes.

What to see on the way from Ubud to Amed?

➣ Ubud to Tenganan Pegeringsingan village will take around 1 ½ hours. We spent around 1 hour and spend a large part of that speaking to the guide. How long you spend here depends ultimately on oneself, but it won’t be longer than 1 ½ hours.

Tenganan village is one of Bali’s oldest and a walk around the rugged streets gives a glimpse into what Bali was back in the day.

Old houses, undisturbed streets and dense jungle surrounding are just part of why the village is unique.

According to Wikipedia, until the 1970’s the village was the most secluded society in the archipelago.

Tenganan stands out for its traditions. Although the village has, in a way, caught up with modern privileges, it still clings on to ancient traditions and laws.

To enter the village there is a donation fee and a helpful guide will be assigned. Walking along the rugged streets and charming houses our guide pointed out a few that are uninhabited. Villagers have started to seek new opportunities in bigger cities like Denpasar.

Further on we came to a common area dotted with open huts. Each hut had its own purpose but are mostly used for cooking or ceremonial gathering. All the village women were gathered here, each working on cooking food to be later offered to the gods or hand making containers that will hold the offerings.

Beside all the useful information surrounding the village, our guide invited us to his house. This is where his family make a daily living by creating artistic ornaments and beautiful scarves.

Each year, this isolated village holds one of the Balinese oldest ceremonies and is unlike any other ceremony in Bali.

The Pegeringsingan Festival is an ancient tradition that is only practiced in this village. Apart from offerings to the gods and demons the main event is a friendly war ceremony. Male villagers fight one another with thorny leaves in one hand and a small shield in the other. This part of the festival does get somewhat gruesome and fighters usually end up with bloody slashes.

Strangely, visitors are allowed to come for the ceremony/ritual against a fee. So if you’re in Bali between June and July and are looking for something unusual, look out for this event.

➣ Next ask your driver to take you to one of these palaces. Tirta Gangga or Balai Gili (Balai Gili is more commonly known as Ujung Water Palace). Both are stunning and travel time is 40 minutes from Tenganan Pegeringsingan. Balai Gili is the largest and least popular. Tirta Gangga is smaller, has more shady areas and is more Instagrammable. Hence, Tirta Gangga gets a lot more attention.

Having 2 palaces, both similar and both within the same distance, we settled on the least popular, Balai Gili.

As we had expected, the palace is a beautiful curated garden of trees and pretty flowers.

Some interesting history about this palace and the royal family is in the first building.

From here, a bridge makes way over a pool and will lead you to a big turf garden. Trees are dotted along this open space offering some welcoming shade.

Further inside you can make your way up a multi tiered garden which is also a look out onto the stunning setting of the palace.

Each tier is different. Some have bushes and others strange feathery plants. Last tier is dedicated to a never ending sunflower garden that look over the pretty pool garden. 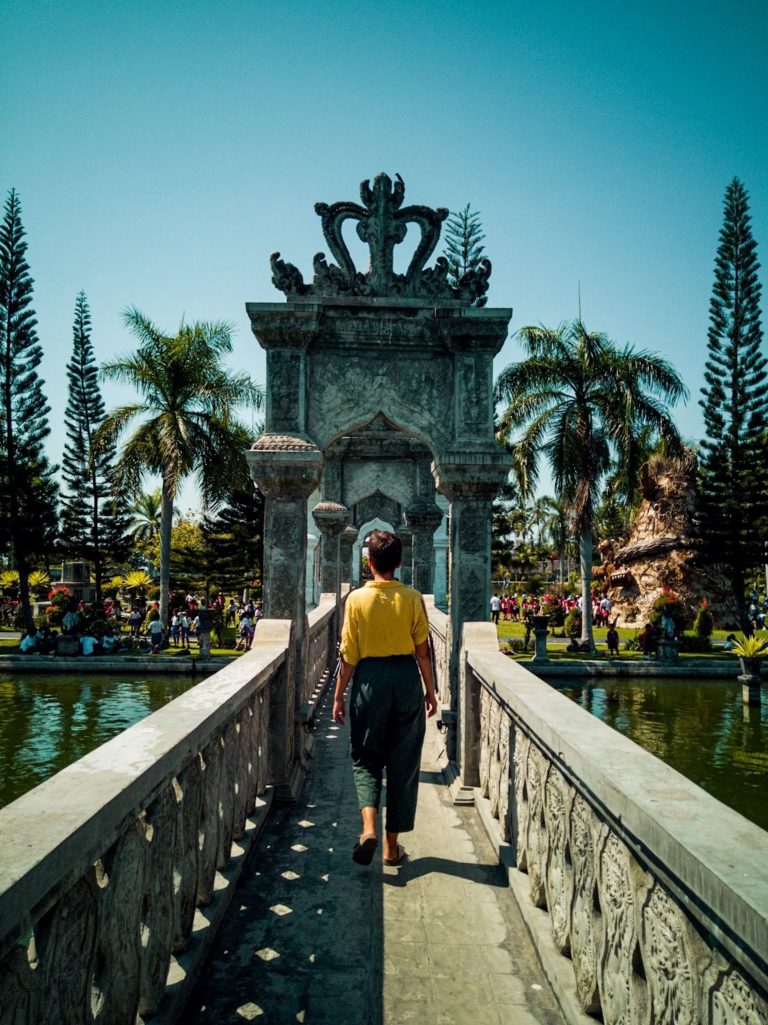 ➣ Next stop will be Bukit Cinta Pangi. This is a viewpoint that will blow you away and is only 15 minutes from either palace. For us this was the best viewpoint in all of Bali.

Before reaching Bukit Cinta, you will come across a small area of jungle that eventually opens up. This is where you will be hit by the amazing view.

Going on for quite a distance, a patchwork of rice fields lay right beneath the vantage point. But the verdant fields are just part of the view here and are an addition to the main highlight.

The main draw is an imposing view of Mount Agung that dominates the whole scene.

Although still far away the sheer size of this volcano is formidable.

From Ubud to Amed - Other Useful Tips

Travelling time for this day trip is 3 hours and is just 30 minutes more than if you go directly to Amed.

For the trip you will need to hire a car with driver for at least 8 to 10 hours (depending on how much you spend at each attraction). This time will include the amount of time that the driver will take to get back to Ubud. Around 2 ½ hours. Hire cars with drivers are a lot cheaper than a taxi.

You will find loads of drivers willing to take you on this trip but first check prices. First offers are generally steep and will be around twice the actual price, if not more. Price should be between 500k – 700k IDR (32 to 45 EUR) depending on how long you have the driver.

Unless you are alright with travelling the last part of your day in the dark, don’t leave any later than 11:00 am.

What To Do in Amed?

This post provides Amed’s top spots and the best things to do while there.

Click on the right most button to enlarge the map, get the map legend and search the map.

Other destinations worth including in your Bali itinerary.

Join us on our trip to South East Asia and we will provide you with useful travel tips as we visit different countries. We will also send you articles providing comprehensive guides to travelling to places in SE Asia.

What to do in Yogyakarta at night Indonesia – The Travel Deck